Many of us, when we were very young, played with green army men. Those little pieces of plastic might have flown around like the superheroes we watched on Saturday morning or after school cartoons. When we got older, we could afford, or in my case inherit, action figures of those same heroes, perhaps a Batman from the Animated Series would then fight a Captain America from the old Secret Wars figure line. Today, we have HeroClix, a miniatures game from the company WizKids. It’s like playing with those old toys of our youth, complete with all the villains and heroes from the comics, movies and cartoons, only now there are rules so that John’s Green Lantern can’t just BE invisible because he thought he saw it in an old comic once. The front yard isn’t your play field, but instead they are detailed maps of Gotham or the Prisons of Oa. Army men and action figures all grown up.

The rules are easy enough. It used to be, in the first few sets, there were multiple strengths of the same Clix, but in today's game, each figure is unique. A figure comes in a box with up to six others, included with them are cards that have any special powers associated with them. When it comes to powers, there are standard ones which appear on the figure itself in the form of colors on specific stats. Special powers are different though, things like a Flash that can run off the map and appear on any edge on the next turn! Those are the most fun, as each is meant to capture the feel of that iteration of the character. So, while there is more than one Flash figure, each one is different, representing a different place in his storylines. For example, the Flash I mentioned previously comes from the Flashpoint set. Another, which has completely different abilities, stats, etc., comes from the New 52 set.

The stats for each character are set up the same and include Movement, Attack Power, Defense, and Damage. Some figures have small lightning bolts on the side of the stats to represent ranged attacks, because what would Hawkeye be without the ability to fire three attacks! The stats are easy to remember as they have a small picture next to each. There’s a little foot to the left of Movement, a fist next to Attack, shield for Defense, and a star to the right of Damage. Each of these stats may have a color, as I mentioned, which means a different thing depending on which stat it’s on. Orange, for example, means Hyperspeed when it’s in the Movement stat but means Poison when in the Damage stat. There’s also a number for each stat which tells you basic information important to play, such as how many squares you can move or how much damage you do when you hit. All these numbers and information are found on the base of the figure, but they can also be referenced from the card that comes with it. Also found here will be the point cost of the model. When building a team for play, this is how much it costs use this character in your group. The cost is usually dependent on how powerful the piece is and can range from a 20-point Joker Goon (easily knocked down, but a great way to tie up your enemy), all the way up to 400 points for a Darkseid (who is going to own the map). Those are just examples, there are figures that are cheaper and ones that are more expensive to use. Some are very special, like a Celestial or Galactus, who have their own rules and can be up to 2000 points!

All of this may sound like it’s difficult to grasp and, to be fair, it can be an incredibly sophisticated strategy game, but the basics are extremely easy, and you don’t have to play like Iron Man if that’s not your thing, as Hulk is also a viable play style. Here’s an easy breakdown and example of how the stats work in relation, but we’re going to ignore all those neat powers for the moment. First, your Movement stat is the number of squares you pass through with that character, let’s use Shazam from the new Rebirth set, because his movie just came out not long ago, and it was great! His movement is 11 and, since he’s already said the Wizard’s name, his foot icon also has a little wing on it denoting flight, allowing him to ignore tall objects and the like on the map (these usually cause a decrease in movement if you don’t have a power). The Big Red Cheese moves 11 squares straight forward (he’s itching for fight), directly at, we’ll say, Black Bolt from the new Earth X set. They’re now next to each other, setting up for the attack phase. It’s Shazam’s turn, so he attacks by rolling two six-sided dice, then adding them together along with his Attack stat, then comparing them to Black Bolt’s Defense stat, which is 18. The King of the Inhumans is no slouch. The dice come up a 4 and 5, giving him 9 on the dice, so together with his 11 attack, he’s got a 20 altogether, beating Blackagar’s defense of 18. We now apply the damage, which for Billy is a whopping 4! To apply damage, we do what the game is named after, we click. Clicking is when you take the dial and moving the top to the right. When this happens, lots of changes might occur, such as the loss of powers or a reduction of stats. Black Bolt, in our example, would now find that, among other things, his Defense stat has been lowered by 1, giving him a 17. At this point, we most likely would have applied different powers, both special and stat, but, as you can see, the basic system is easy.

From our example, you can also see that Licenses can mix! Meaning we can have epic battles between the X-Men and the Teen Titans! Who hasn’t wanted to measure up the Justice League against the Avengers? It’s not just the Big Two either. There have been sets for indie comic properties as well, like Hellboy or the Teenage Mutant Ninja Turtles. For the most part, all these Clix are compatible for play with each other, allowing for you to play a team with Superman and Captain America. Maybe you’re into Magic? Zatanna and the Scarlet Witch got you covered, with both Swamp and Man-Things as back up. The team-ups are endless! 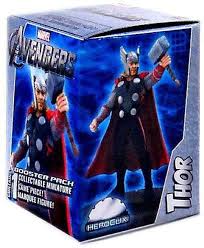 There two types of games, however, that should be mentioned first. Like games like Magic the Gathering or Warhammer, you can play at home. or anywhere that will let you lay down a map, for casual play, but, if you’re lucky, you can go to your local hobby or comic shop and find a tournament game. These two types are very different. A casual game is just you and your friends, so you can decide on how many points you want to play and for how long. You can choose maps, special rules or even number of players, basically whatever you agree on. If Chuck wants to play that Celestial against you and Matt, each with your own teams, to the last man? Go right ahead! You can use sets from any time you like, as well as maps and rules. It’s a blast to play casual, and I’m going to have a few articles about some games I’m planning with just this in mind.

Tournament play is a little different, but then, it must be given the prizes involved. Really, if I can say anything about why you’d want to play this style of game, it the figures that are ONLY available from organized play. These can be a lot of fun as well, and have a few different ways they can be done depending on the store and who’s running the league. The two I find the most fun are the Box Tournaments and the Campaigns. In the first, you buy 4 boxes of Clix, which shouldn’t set you back too badly, generally around $20, then you open them and use the random figures to make teams. These usually run from 300 to 500 points. Obviously, you get to keep the Clix you bought, but there’s a chance that if you place in the Tournament that night, you can get rare Clix as well! Now, Campaigns are usually constructed teams, meaning you put them together ahead of time, and there are special maps and rules. For example, the War of the Light Campaign featured maps from that story arc and rules that matched up to the comics, like when the Sinestro Corps overwhelmed the Sapphire Corps. In that, the Sinestro team got more points for teams, but the objective was different. The Sapphire had to defend the Crystals within the time allowed for the game. Most organized play will let you know how many points you must build teams, how much time you have for play and any other special rules. There’s one other important factor for organized play and that’s that only certain sets are allowed. Legal sets only go back so far for these games and when a new one comes out, an old one is generally dropped. Some players find this upsetting because they lose a favorite figure, but trust me when I tell you, the new sets are amazing, and you will find something new for your collection that you’re going to have a blast playing. Plus, that favorite figure can always be used for casual play!

My first time playing HeroClix was a Box Tournament. I must be honest, I wasn’t expecting much when I opened my boxes, then again, I really didn’t know what to look for. Imagine my surprise, when I brought them up to the local store’s counter, that I had TWO rare figures for the time! One was a Darkseid, an amazing figure, hands clasped behind his back. The other, however, was very special: A Dark Knight Returns Batman, complete with Kryptonite Gloves. He was glorious and, while old Grey Face was my MVP that night, that Batman cemented my love of HeroClix. Any time you open a box of HeroClix, you might just get your own Batman rare figure. In more modern times, though, he may be the Batman Who Laughs. Hopefully you can get a few Robins for him to leash, either from a blind box or buying them individually. Or maybe you’ll get lucky. What’s better to pair with that Batman? How about Red Death Batman or a Venom Gwenpool! The epic fights you always dreamed of when you were playing with those action figures is at your fingertips. Straight from the comic, out of the box and into your hand, ready to battle!