Webcomic "Cheese In The Trap": A Beautiful Farewell Letter to Tropes.

Story and Art by Soon Kki

Romance drama stories have a very special place in the world of Manga and Webcomics, their intended target has always been teenagers and young women, so after reading hundreds of such stories, the genre can become tiring and limited because of its constant use of tropes. Cheese In The Trap exploits the concepts behind the tropes like misunderstood mean guy, the damsel in distress, the dependable nice guy and other such tried and tested patterns of characterstics, and presents one of the best-drawn romance/drama webcomics of all time, accumulating readers from all age groups and sexes.

First published in South Korea under the home banner of Naver Webtoon, Cheese In The Trap finally completed its seven-year run in English translation. It follows the story of Hong Seol and her complicated journey through university life, adulthood, and love in four seasons. Though the blurb lures its readers with hopes of good art and usual drama, it turns the tables within the first three chapters. Seol, a hardworking girl returns to university after a long break, and her life seemed to spiral around for the worse when she crosses paths with Mr Perfect: Yu Jung, who fits the bill of every dream hero; tall, handsome, polite, helpful, popular, and well off. Though people seem to flock around Jung, Seol can’t seem to help feeling uneasy about him.

Soon Kki, the author takes us through a ride of suspense, anticipation, and frustration. One of my major complaints with romance drama authors is that they often fail to balance the world-building and character arcs and subplots; sometimes the subplots overshadow the main storyline and at times there is no character development or world-building. But this webtoon found the perfect balance! The author let the subplots branch out, characters live their actions, and they eventually, seamlessly contributed to the main narrative.

My favourite part about reading and waiting for this story every Sunday was the art, the beautiful use of panelling from drop caption to different shades of gutter space to imply the flashbacks and memories and dreams to use sepia tones for specific junctions in Seol’s life; it was a joy reading through these transitions of timelines.

The comment section of this webtoon has also seen one of the biggest "ship" wars any fandom has ever seen, despite the rule of first being sacrosanct, Soon Kki made everyone’s heart race till the last chapter. Though I have always had a soft spot for the mean dark-haired guy in comics and anime, the author made me question my choices and understand the implications of this trope of what Rainbow Rowell popularized from Nicholas Kale’s tweet as Depressive Demon Nightmare Boy.

Jung is manipulative, intelligent, and has trust issues, to him the world is set in a binary of people who want things from him, and people who don’t serve a purpose in his life. In his life, Seol stands as someone who is similar yet she doesn’t treat the world as binary, to her world is a linear narrative of cause and effect. Their interaction and transition from strangers to classmates to friends, and later as a couple is an amazing graph to study. Had they been selfish and more ruthless, they could almost evolve as an evil power couple. But Soon Kki only lets us glimpse at their potential as a couple in sync.

There is, of course, the second lead Inho Baek; the reason for the ship wars and his sister Inha, who also help add another layer to the story and add rage to Jung’s personality and more misery to Seol’s life. Inho doesn’t bring any betterment to Seol’s already hard life, instead of the traditional pattern of second lead being the stable and caring guy, he brings chaos and mess that have long lasting impact on everyone involved with him. Inha will leave readers divided, either they will hate or sympathise with her situation, but she will make people feel lot of things. Jang Bora and Eun Taek deserve their mention too for being the supportive best friend characters to Seol, and providing the comic relief "idiot couple" goals within the story. The trio in their panels was a riot to read, their concerns and actions were not drawn on the two-dimensional idealization of the superior, but love. I equally enjoyed Bora’s character design and arc, as she too broke the "strong best friend" trope. And Eun showed how masculinity can be nurturing and supportive without the need to exhibit it. 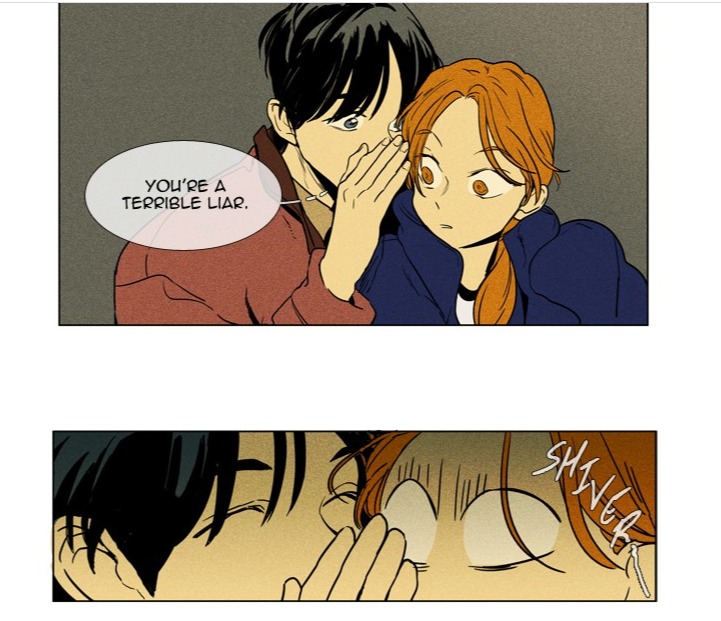 What I admire is the research and attention to details that went into the world-building, when the story mostly revolves in and out of the university. Through various seasons and semesters, we get to see this world, and the creator has missed continuity of scenes only twice in two minor panels in her 301 chapters long series!

We get a real-life view of a middle class South Korean student’s life and problems. Seol’s biggest tension is always about her scholarship and tuition. Her actions are relatable, like skipping lunch to save money, or wanting to buy a pair of boots but making ends meet always takes priority, or the constant pressure from her family to be smart and understanding... all are spot on and so sensibly dealt with and illustrated! For years I waited for a story where the protagonist pulls herself out of her troubles; having a rich boyfriend automatically did not miracle away her life issues. Jung is one of the important aspects of her life, but he doesn’t eclipse her entire life.

Some of the issues and themes presented are so well-handled that, I couldn’t help but scroll down the comment sections, where girls and women from all age groups poured out their affection for Seol. Over the course of her university life, Seol goes through various problems, like working alone in group projects, or peer pressure from seniors, or being given wrong information by jealous classmates, and everyone’s nightmare: stalking. Every experience voluntarily or involuntarily moulds her future actions, which build-up for the throat-numbing climax of the story.

Cheese In The Trap has definitely set a standard on how I will read YA books and Romance manga and webcomics from now on, tropes are fun but once a reader learns how tropes can be broken and bent and stretched to write and illustrate a better tale, there is no going back.

There is a Kdrama based on the series on Netflix with an open ending.

There is also a movie based on the same.

COMICS RETROSPECTIVE: Things get taken to the next level in Invincible Volume 5: The Facts Of Life!